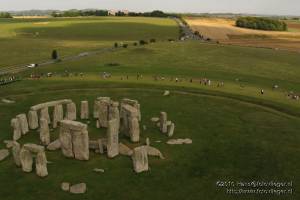 Amazing stones, amazing construction, amazing density of digital camera's in the middle of nowhere (this was on a Monday!). These images were taken by a camera lifted by a kite.

Security was not amused: when the kite flew about 2 minutes I was asked to take it down; which I did very carefully to avoid injuries

B.t.w. I am very satisfied with the PFK (the kite I used: Paul's Fishing Kite, bought at http://www.kapshop.nl1)). It is very easy (read quick) to launch, and has proven to be very reliable. I wish they had a 'stealth' model made of transparent fabric…

Stonehenge is an English Heritage Site. It was inscribed on the World Heritage List in 1986.

Stonehenge is surely Britain's greatest national icon, symbolizing mystery, power and endurance. Its original purpose is unclear to us, but some have speculated that it was a temple made for the worship of ancient earth deities. It has been called an astronomical observatory for marking significant events on the prehistoric calendar.

While we can't say with any degree of certainty what it was for, we can say that it wasn't constructed for any casual purpose. Only something very important to the ancients would have been worth the effort and investment that it took to construct Stonehenge.

The Construction of the Henge was an impressive engineering feat, requiring commitment, time and vast amounts of manual labour. In its first phase, Stonehenge was a large earthwork; a bank and ditch arrangement called a henge, constructed approximately 5,000 years ago. It is believed that the ditch was dug with tools made from the antlers of red deer and, possibly, wood. The underlying chalk was loosened with picks and shovelled with the shoulder blades of cattle. It was then loaded into baskets and carried away. Modern experiments have shown that these tools were more than equal to the great task of earth digging and moving.

The images below where taken with a Canon 720IS suspended under the line of a 2 meter PFK (Paul's Fishing Kite).