These images were taken for Baars BV, owner of the split hopper barges and the large coupling pontoon supporting the backhoe crane.

These images were taken in October 2011 with a camera lifted by a kite. The kite was flown from the small survey vessel that is visible in the last image. 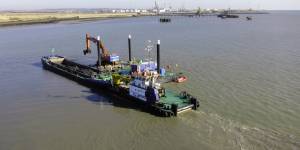 Wikipedia: London Gateway is a major new development under construction on the north bank of the River Thames in Thurrock, Essex. It comprises a large new deep-water port, which will be able to handle the biggest container ships in the world, as well as one of Europe’s largest logistics parks, providing effective access (by road and railways) to London and the rest of Great Britain.

The development will dramatically increase the capabilities of the Port of London in handling modern container shipping and help meet the growing demand for container handling at Britain's ports.