Aerial images of the Armada Intrepid (former Schiehallion) being loaded on Dockwise Vanguard (Boskalis) in the Caland Canal (Port of Rotterdam). The Armada Intrepid is a 250 m FPSO (A floating production, storage and offloading vessel). The Vanguard will transport the Intrepid from Rotterdam to Indonesia 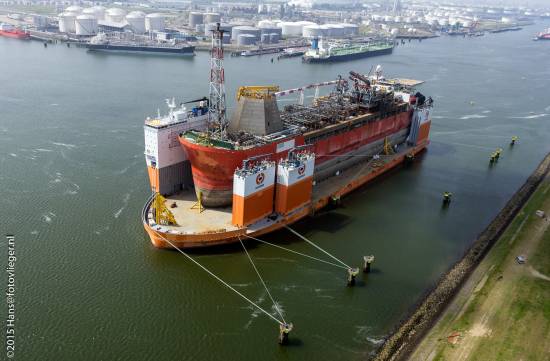 Boskalis.com: The Dockwise Vanguard is the world's largest semi-submersible heavy-lift carrier. The Dockwise Vanguard has a load capacity in excess of 110,000 tonnes, accommodated on an open-end, free deck space of 275m x 70m. The absence of a raised bow and conventional forward superstructure means that cargo overhang, either forward or aft, is possible.

These aerial photographs were taken on May 7th, 10th and 14th, 2015 in the port of Rotterdam (Calland Canal near Rozenburg). The camera was lifted by a kite.