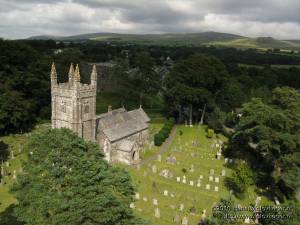 Lydford is a small village with nice pub and a beautiful old church. The interesting square building that is visible in some images is Lydford Castle, a notorious medieval prison.

Most images were taken by a camera lifted by a kite (6.5 foot Rokkaku). The weather was great for taking photographs: dark skies with patches of sun. The threatening rainy clouds were a bit scary when the camera was a few hundred feet in the air.

The low altitude close-up images were a tricky team effort due to the presence of some large trees: my wife operated the radio controlled camera rig while I flew the kite…

…The earliest mention of the church is in 1287 when Henry III granted the tithes of Dartmore to the church of St. Petroc. The only remains of this early church is the Font, which may be Saxon or early Norman. It is made of Hurdwick stone. Some of the granite floor stones of this period may be seen at the inner entrance to the porch and in the window splays in the south aisle.

With increasing population and wealth (due to tin mining) the church was enlarged in the 13th century and re-dedicated on 3rd August 1261 by Bishop Walter Bronescombe. The building was extended westwards from the first pair of pillars to the tower.

The tower itself and the south aisle were added in the 15th century. An altar was placed at the east end of this new aisle and the piscina can be seen in the south wall.A 'squint', or hagioscope pierces the chancel wall to give a view of the main altar from the aisle. The rood staircase leading to the top of the screen probably existed before the 13th century enlargement.